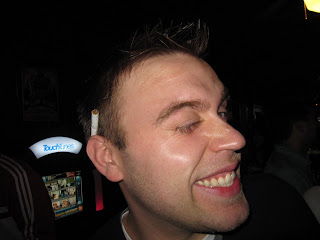 Note: I started writing this for his guestbook, but it ended up really long and I'm not sure it's gonna post. So, here it is. Feel free to share any memories you don't feel are appropriate for the guestbook.

I've never met anyone like Lenny. He was one of those rare people who brought laughter everywhere he went. I’ll never for­get his sense of humor or his contagious smile. No matter what was going on, no matter how sad you felt, if Lenny was around, you could look over at him and he’d make some goofy face to make you bust out laughing.

I’ll never forget the way he could take over a room (it’s hard to believe that we’ll never see him do the lawnmower or the worm again). Just a few weeks ago, all of our old buddies from high school went to Cincinnati for a road trip. The highlight of the trip was when we accidentally stumbled into a bar where we were the obvious minority. Some people left, but Lenny, Jimmy, Matt, and I stayed. I’m glad I stayed. By the end of the night, there was a giant circle on the dance floor around Lenny. Everyone in the place was cracking up. He was the type of guy who could make any night memorable. It was a common occurrence to laugh until your jaw hurt when you were around Lenny.

I’ll never forget his loyalty. When we were sixteen, I crashed my car with Lenny in the back seat. He broke both of his arms. It was a pretty traumatic event for all of us, but Lenny got the worst of it. He had casts on both of his arms all summer. A few weeks after it happened, I finally got the nerve to go over and see him to apologize. I was so nervous, but Lenny acted like it was no big deal. He made a few jokes, we laughed a little, and it was good again. He wasn’t angry at all. I don’t think many people would be so forgiving. I think that was when I knew we’d be good friends for a long time. From there on, he was always there when I needed him.

Most of all, I’ll never forget the way he lived his life. It seems cliché, but anyone who knew Lenny, knows that he followed his own rules. Lenny, Jimmy, and I roomed together our first semester of college. Although, college wasn’t really Lenny’s thing, we crammed a lifetime of experiences in that semester. Some of my favorite times were speeding in the Topaz down Highway 55 with Lenny and Jimmy singing Chili Peppers at the top of our lungs filled with the excitement of what was to come. He wasn’t afraid to try something and fail, then move on to something else.

Lenny made the most of every day. He did what he wanted, when he wanted. He was fearless. He has had, and will continue to have a huge impact on my life. I wouldn’t be the man I am today if we hadn’t been friends. I am so thankful that I was fortunate enough to be close to Lenny the past sixteen years.

For the rest of our lives, there will be a void where Lenny was supposed to be, where we expected him to be. It would be easy to be saddened by this, to shed tears over it, and curse the injustice of it all – I know I’ve spent the past two days doing exactly that – but in the end, I always picture Lenny across the room making some weird face at me and smiling that huge smile, and I feel a little better. In the end, we all just have to be thankful that we knew him when he was here—that we have so many adventures to tell our children about—so many memories to make us smile when the world seems like such a horrible place.

Posted by Olly Olly Oxen Free at 8:41 AM